Feathered Friends of Riemore at Tamborine

You are here: Home / News / Feathered Friends of Riemore at Tamborine 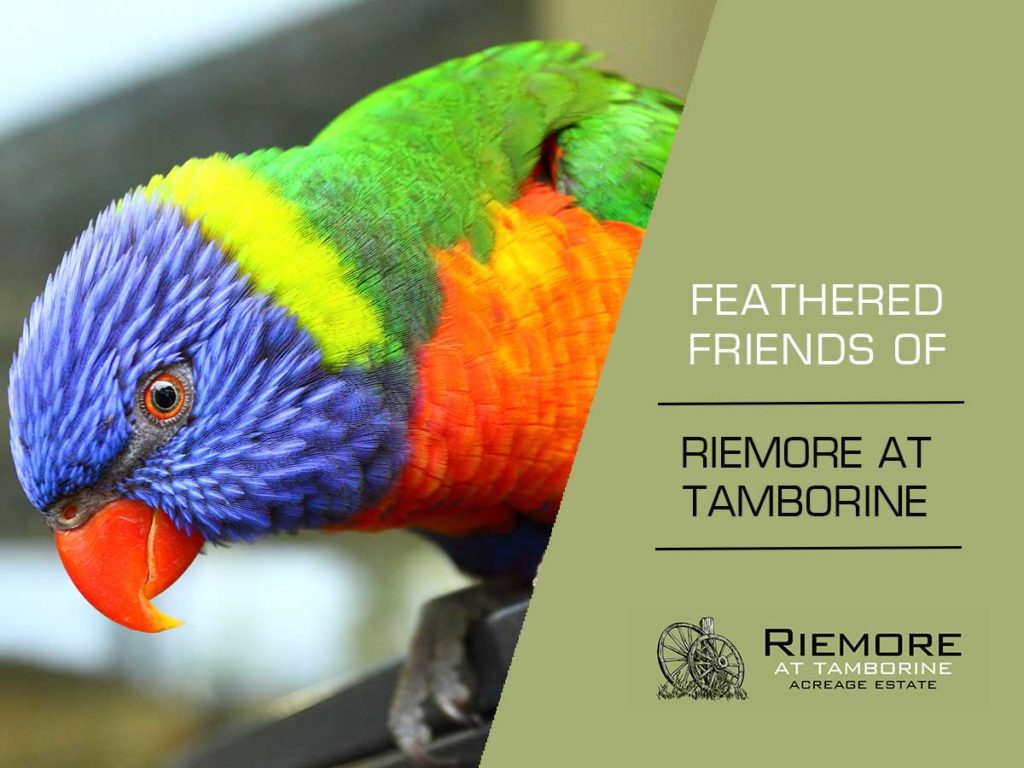 This area has a lot to recommend it – clean air, beautiful views, lovely people… and of course, some absolutely stunning native fauna! Here are some of the birds recorded in a recent survey of Fred Bucholz Park on Walnut Road by Wildlife Queensland Scenic Rim Branch. 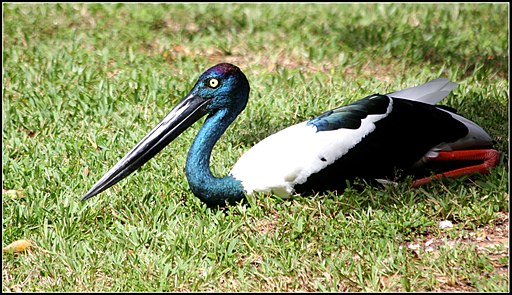 These storks are a sight to behold in the air or on the ground – and they’re big, about a metre and a half in height and quite a bit more in wingspan. They eat fish, lizards and small birds, and build large platforms in sturdy trees on which to nest. 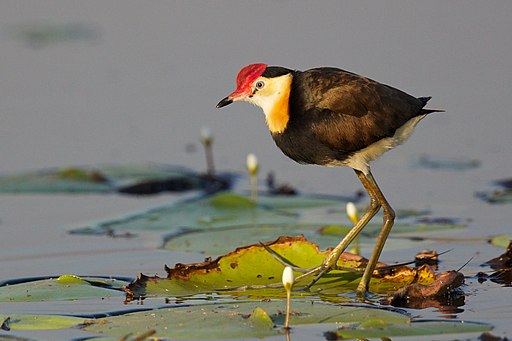 Also known as Lotusbirds and Lilytrotters, these little birds have toes out of all proportion to their size. The long toes help them to walk over floating vegetation and catch insects hovering above the surface of the water. 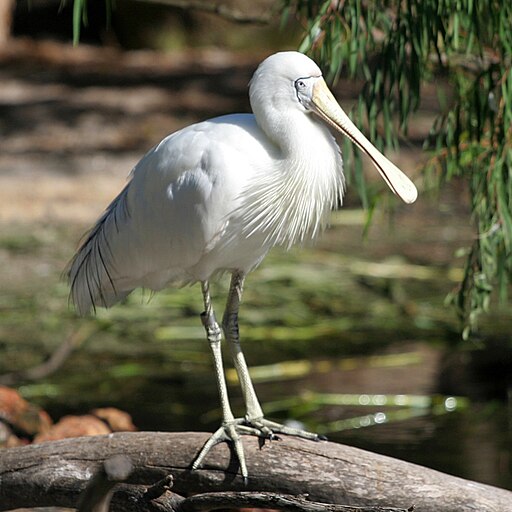 Spoonbills have sensitive ‘spoons’ on the end of their bills that allow them to sift through muddy water, picking out small crustaceans and bottom-feeding fish. This particular species is distinguished by its yellow bill and legs. 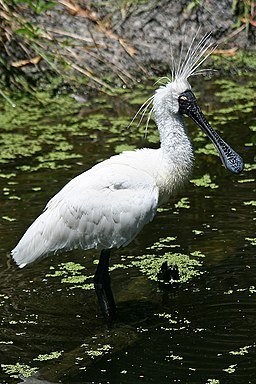 Smaller than their cousins, the Yellow-billed Spoonbills, Royal Spoonbills have black legs and bills and a distinctive (and very attractive!) crest. Another less-obvious difference is in the greater sensitivity of the ‘spoons’ on their bills – these birds can catch faster-moving prey than other spoonbills. 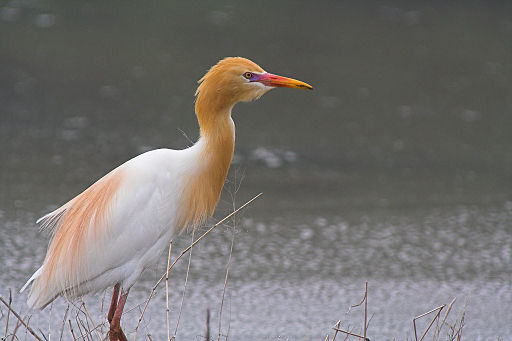 Cattle egrets are great fans of grazing animals like cattle and sheep – or more to the point, fans of the insects that they attract. During breeding season, their otherwise bright white breast, neck, and crown feathers turn orange. 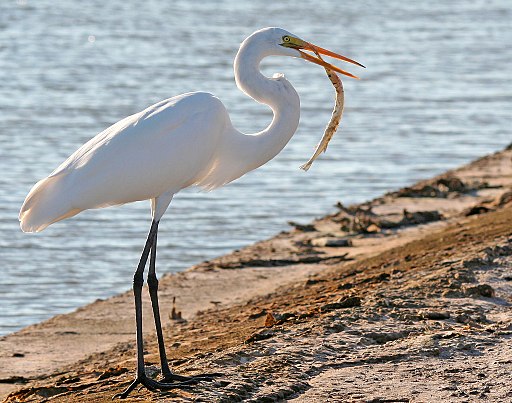 Somehow, these egrets manage to convey an air of great elegance and distinction as they stalk through shallow waters looking for fish. Their yellow or orange bill and facial skin changes colour to a dark green in breeding season. 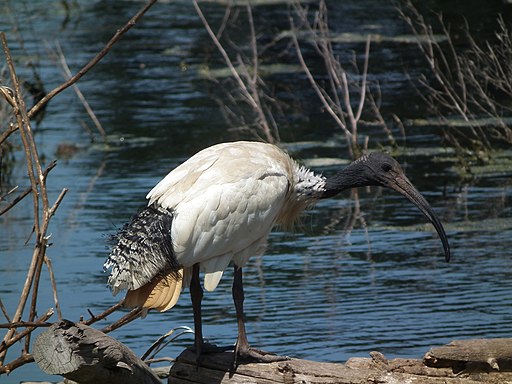 Often known in coastal areas as ‘bin birds’ thanks to their habit of foraging in bins for scraps of food, these birds are crafty enough to adapt to urban environments and thrive. In inland areas, though, their reputation is quite different: they’ll often turn up in the middle of plagues of locusts and similar insects and gorge, earning the title of ‘farmers’ friend’. 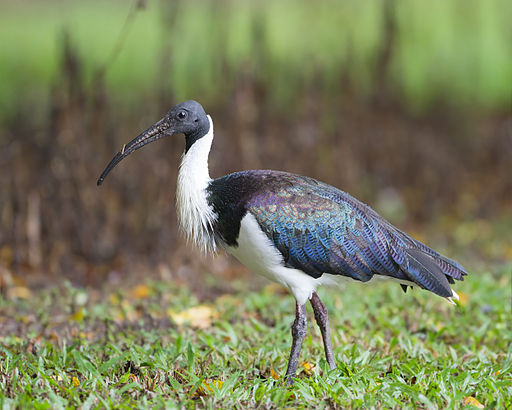 Distinguished by their purple and green sheened black wings and yellow plumes around the throat. Straw-necked Ibis are often found nesting with White Ibis, but don’t tend to congregate in urban areas like their relatives. Instead, they primarily hunt insects and crustaceans, both in coastal and inland areas.

Smaller and darker than their cousins, the Straw-necked and White Ibis, Glossy Ibis tend to stick to wetland areas, hunting small aquatic invertebrates like snails, worms, and mussels.

Swimming birds rather than waders, Australasian Grebes tend to live in swampland and on farm dams, preferring freshwater to seawater or brackish. They build floating nests, and once their chicks have hatched, they can often be seen giving one a ride on their backs. 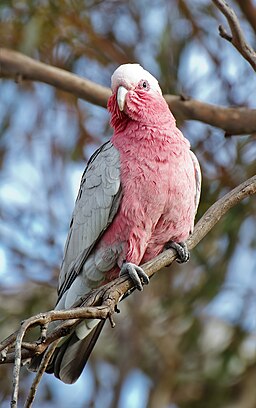 Also known as Rose-breasted Cockatoos, these brightly-coloured birds are a common sight all over Australia. Being seed-eaters, they tend to congregate in areas with a lot of grass – then roost in large, noisy groups in handy trees at night. 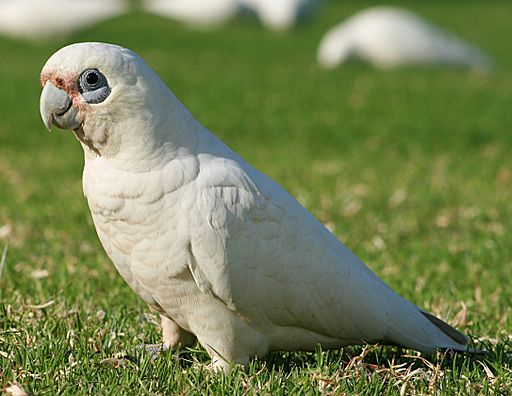 The smallest of the corellas, Little Corellas love to play. Primarily seed-eaters, they tend to flock in grassland and farming areas where seeds are numerous. 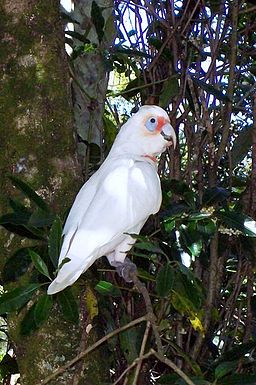 A bit larger than Little Corellas, Long-billed Corellas are distinguished by the bright orange patches of colour around their forehead and throat. Their upper bill is also longer than in most other cockatoos, giving rise to their name.

These brightly-coloured parrots add gorgeous flashes of colour to the bush landscape, foraging for seeds and fruit on the ground and in trees. They nest primarily in tree hollows. 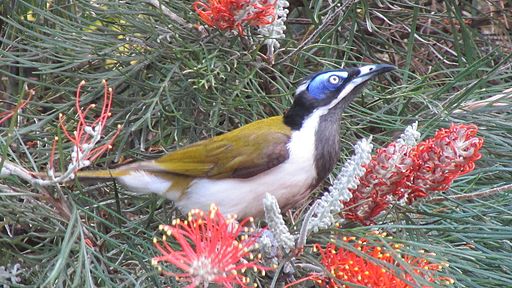 You’ll almost always find these birds in and around trees, harvesting nectar from flowers and hunting for insects and other creepy-crawlies. They’re one of the first birds you’ll generally hear calling in the mornings. 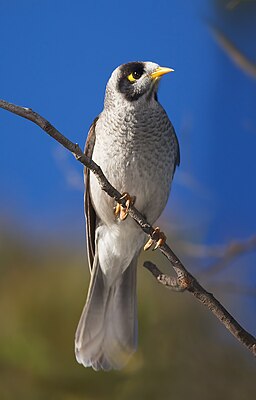 Well and truly earning their name, Noisy Miners tend to be loud and repetitive in their calling. They’re generally found in trees and bushes, eating nectar, fruit, and insects. Many people confuse them with a similarly named but completely unrelated bird, the Indian or Common Myna. 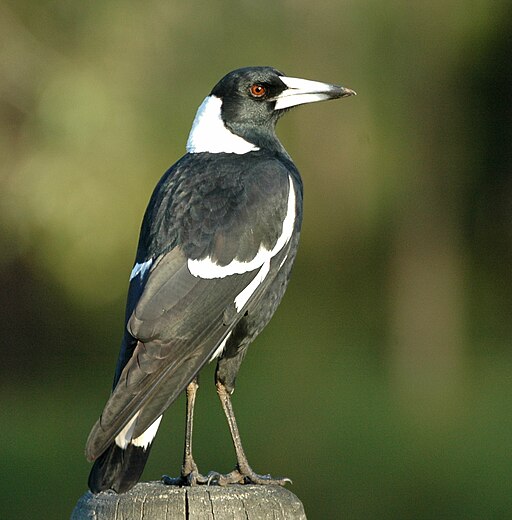 Along with Kookaburras, these warblers provide one of the most recognisably Aussie sounds of the bush. Not that they restrict themselves to bushland; your average Magpie is happy to set up shop wherever the opportunity presents itself. They’re renowned for their nest-defending swooping during nesting season, but will generally soften their attitude to humans upon being bribed with handouts of bread or meat.

One of the cutest birds common to backyards, Willie Wagtails are named for the sideways ‘wag’ of their tailfeathers as they move. Because they eat primarily insects, they’re often seen jumping around on lawns in the process of catching their dinner.

Like Hardheads, Pacific Blacks are also rather oddly named – the ducks aren’t black at all, but a mottled brown and beige. They’re probably Australia’s most common ducks, being found all over the country. Unlike Hardheads, though, they don’t dive for food, but ‘dab’ – up-ending themselves briefly in the shallows to grab food. 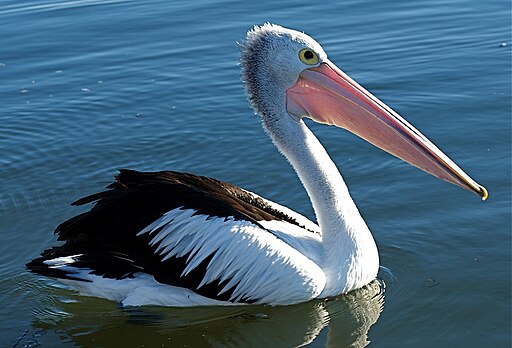 We might have one of the smallest pelican species, but our Australian Pelican makes up for its small body size with the largest bill in the world. These huge bills act as fishing nets, allowing the Pelican to dive, pick up a load of water, then sieve out the water and swallow any fish caught. 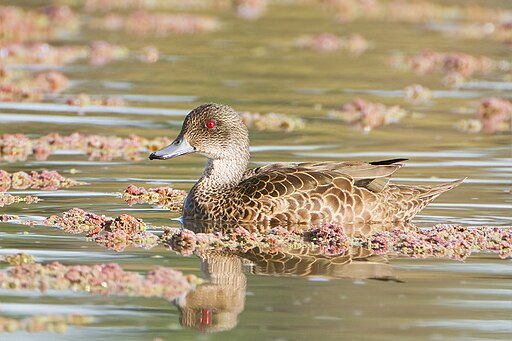 One of our smaller duck breeds, Grey Teals are flock feeders – unlike many other ducks, which tend to live in pairs or small groups. This might be because they migrate often and for large distances, from one body of water to one hundreds of kilometres away.

They might be the state bird of Western Australia, but that doesn’t stop Black Swans from living on the east coast! These vegetarian birds live primarily on algae and water plants, although they will forage on land at times too. 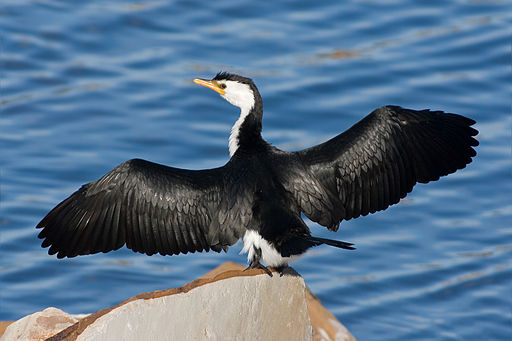 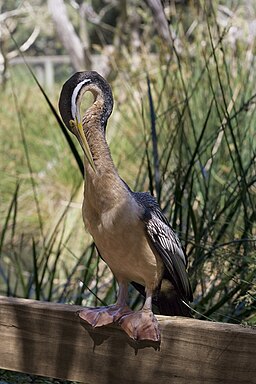 Also known as Snakebirds for their long and supple necks, Australasian Darters tend to swim along just under the water’s surface, head out of the water, rather than just dive like most other water birds. That’s not to say they don’t dive as well – when they spot something tasty for a meal they’ll happily dive and catch or spear it with their sharp beak.

Whistling Kites are both hunters and carrion eaters. While they’ll happily chow down on roadkill, they can also hunt and kill mammals up to the size of a hare, or eat insects, fish, and other birds.

Listen to a Whistling Kite call 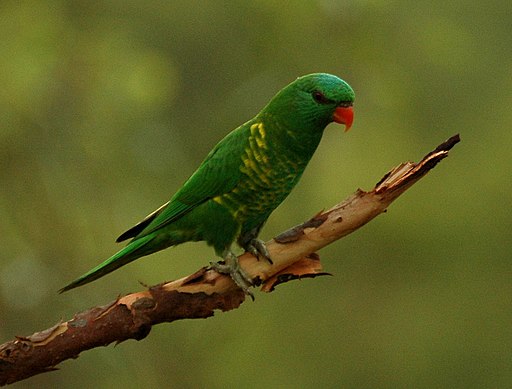 These bright-green lorikeets are nectar-eaters, and they tend to move in flocks. The best way to attract them is with native flowering trees – you’ll probably finish up with a tree-full of birds making a racket and looking very pretty while doing so! 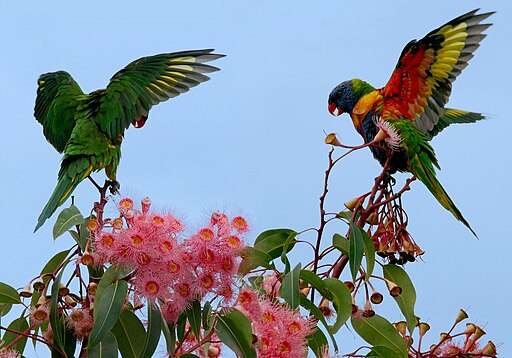 Rainbow Lorikeets have Scaly-breasted Lorikeets beat when it comes to colourful plumage, but they’re also more widespread, possibly through escape from captivity. They can be quite easily habituated to having humans nearby, but watch your sugar; cheeky lorikeets have been known to steal it off outdoor cafe tables.

Listen to a Rainbow Lorikeet call 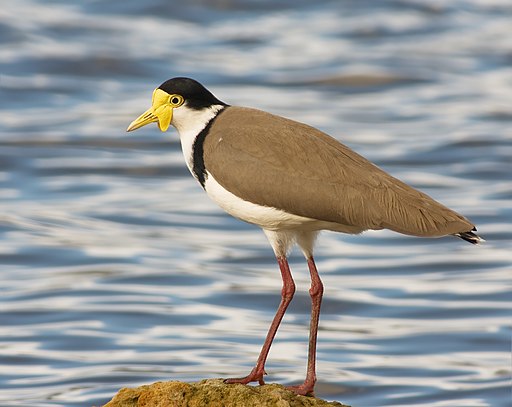 Also known as Spur-Winged Plovers because of the yellow spurs on the ‘wrist’ of their wings, Masked Lapwings get most of their food – insects, earthworms, and larvae – by scratching at the ground. They also nest on the ground, scraping out shallow hollows in which they lay their eggs.

Listen to a Masked Lapwing call 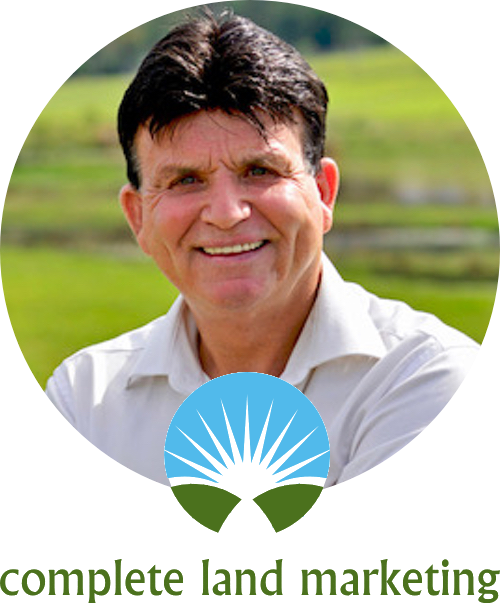 Ask for information about land availability and ask any questions you have.
0487 659 306